I was happy when I opened up Xterra 3500 treadmill. There was only one large box, and although it was heavy it wasn’t unbearable to get open. Sure, there’s lots of packaging, but like anything I want it to arrive looking nice. I didn’t have any issues opening it or notice any damage. It took some time to put together, but anyone who’s handy could get it fully functional in less than 30 minutes. The hardest part was making sure to connect the cables and ensure the fan is working.

The instruction manual was helpful. There weren’t too many steps anyway. When I first turned it on I was a little disappointed to see how low-tech it was. I supposed I shouldn’t be disappointed with it seeing as it’s a middle-of-the-road treadmill. The most important thing is that it can go faster than a 6:30 pace. It had all of the normal features on it: speed levels, elevation levels, calorie count, heart rate, and several workout programs. It’s a pretty good set up and easy to follow.

My first workout wasn’t too bad. You can hold an iPad on it and watch your favorite shows without too much trouble. The emergency pull feels cheap to me (it broke after one of my kids got a hold of it) so take that for what it’s worth. Make sure it’s on even ground (may go without saying). I set mine up in my garage and apparently the surface I had it on was too shaky, so it wobbled when I ran on it. So, the temporary solution was to put a piece of wood under one of the legs and call it good. The legs are a lot smaller than other treadmills, so keep that in mind. The surface where the Xterra 3500 sits is extremely important; I just recently moved mine to a more level space and my runs are significantly better. 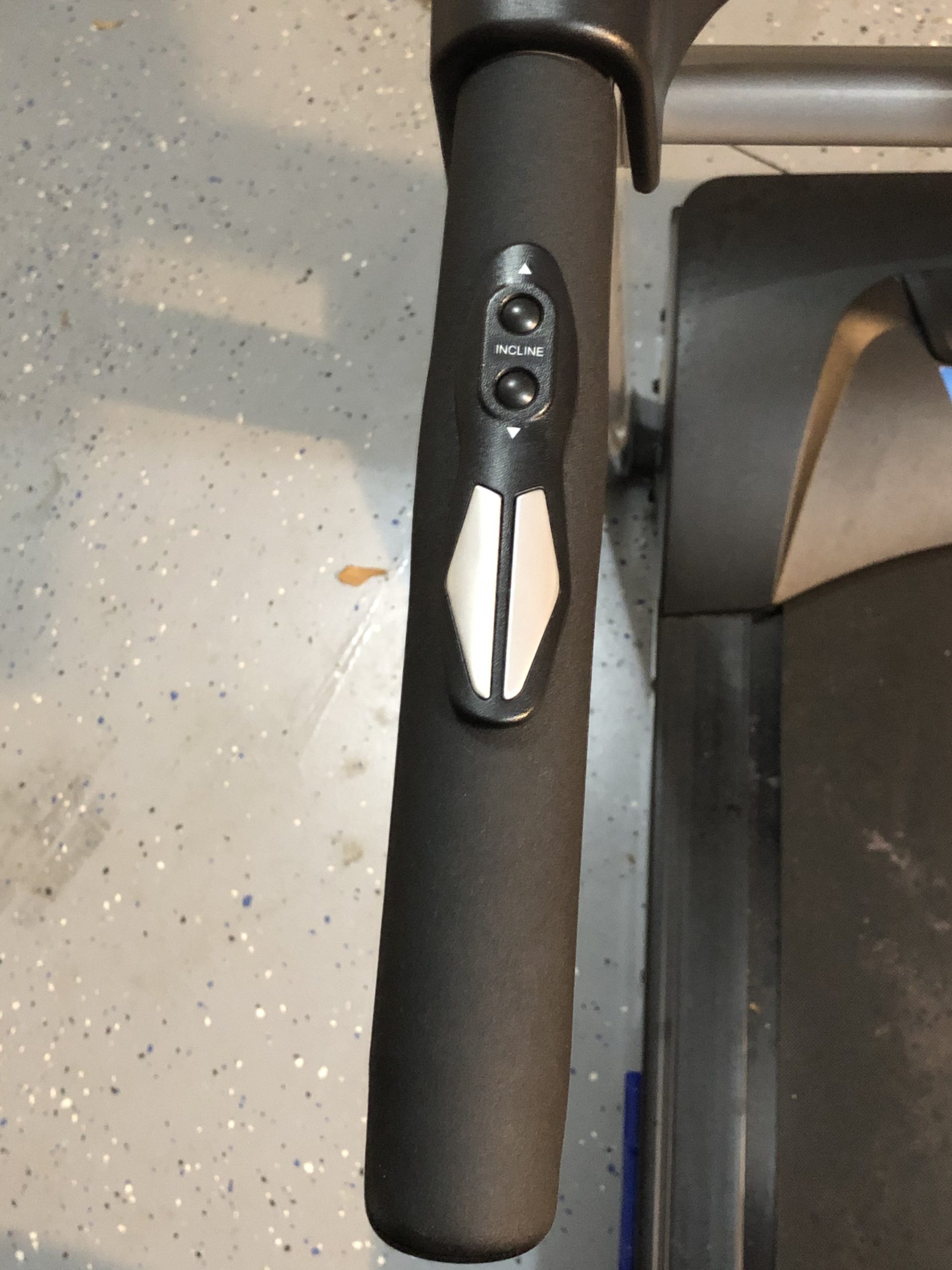 I really like how they have these. They put speed and elevation adjustments on the main dashboard, between the dashboard and the arms, and on the arms. The main dash has big numbers to push as soon as you start your workout, and you can adjust anytime. There are also incremental adjusters on the arms. I like those because I like to incrementally increase or decrease my paces and elevations. It has been helpful for me. I’ll usually start off my run with hitting one of the numbers for speed and elevation then use the buttons on the arms to adjust when needed.

The treadmill is responsive to adjustments. When I adjust speed and elevation, there’s minimal delay. I like that especially when I need to transition faster or slower.

Good- The Treadmill Belt and Frame

Aside from the software, I’m a fan of how the treadmill is built. It has a sturdy feel to it. For a home treadmill, it doesn’t feel like it’s going to break. I run at about a 7:30 pace for most of my runs on this treadmill, and I’ve never felt like it would give out. I’ll go anywhere between three and six miles each run. 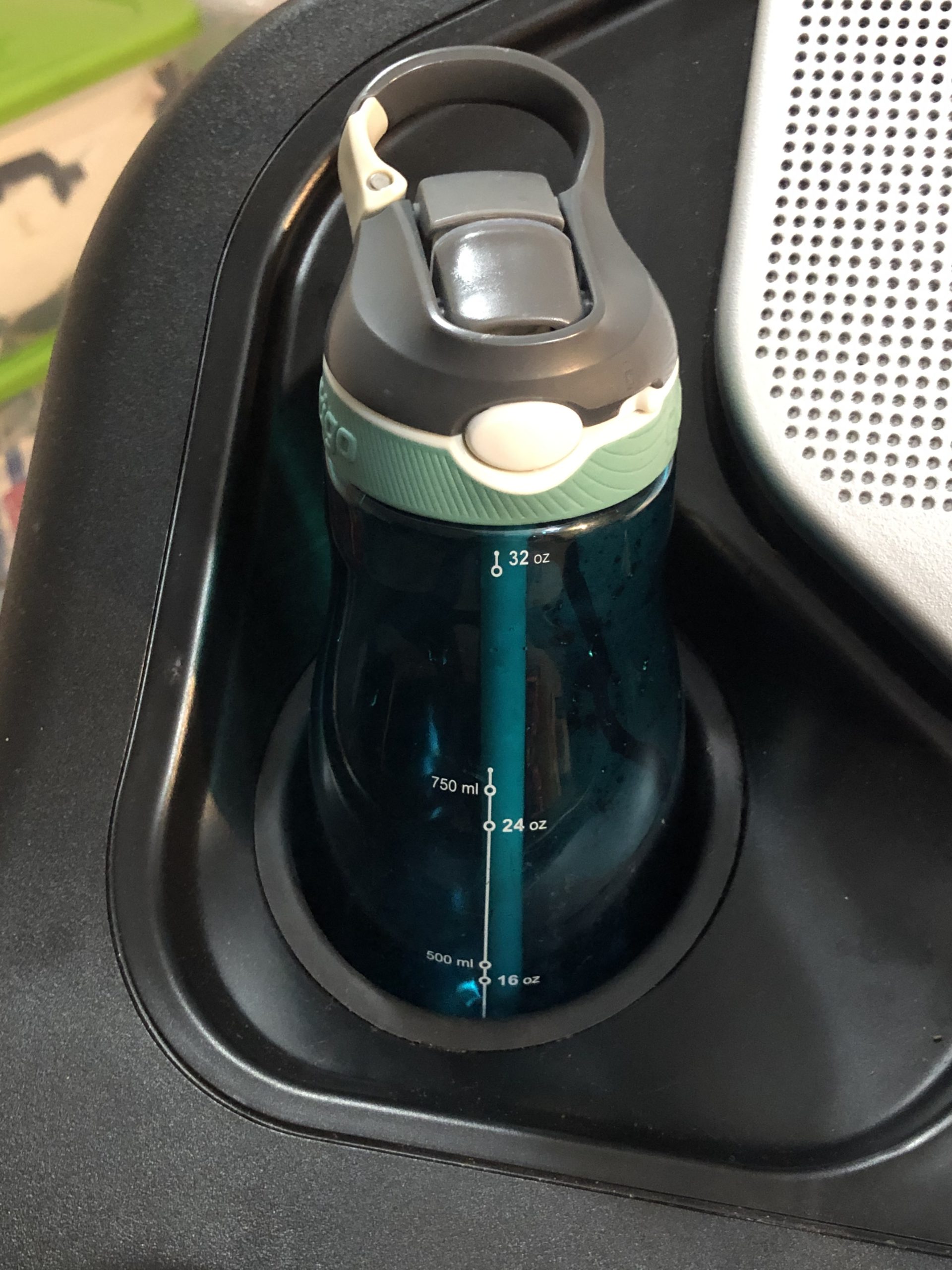 Good-Wheels For Easy Moving
It is easy to move from place to place. There are wheels underneath the front of the treadmill that make it really nice to relocate. I moved this by myself, and I bet that if my wife needed to move it that she’d be able to. The manufacturers did a great job thinking about treadmill maneuverability.

Like I said during the overview, I was a little disappointed, but I can’t be too upset. The display does what it’s intended to do only it just looks like it came from a 1980’s basketball scoreboard. It has bright blue background with white lettering. The words scroll across the screen, so it’s nothing new. It’s just underwhelming, but again, I expected this. 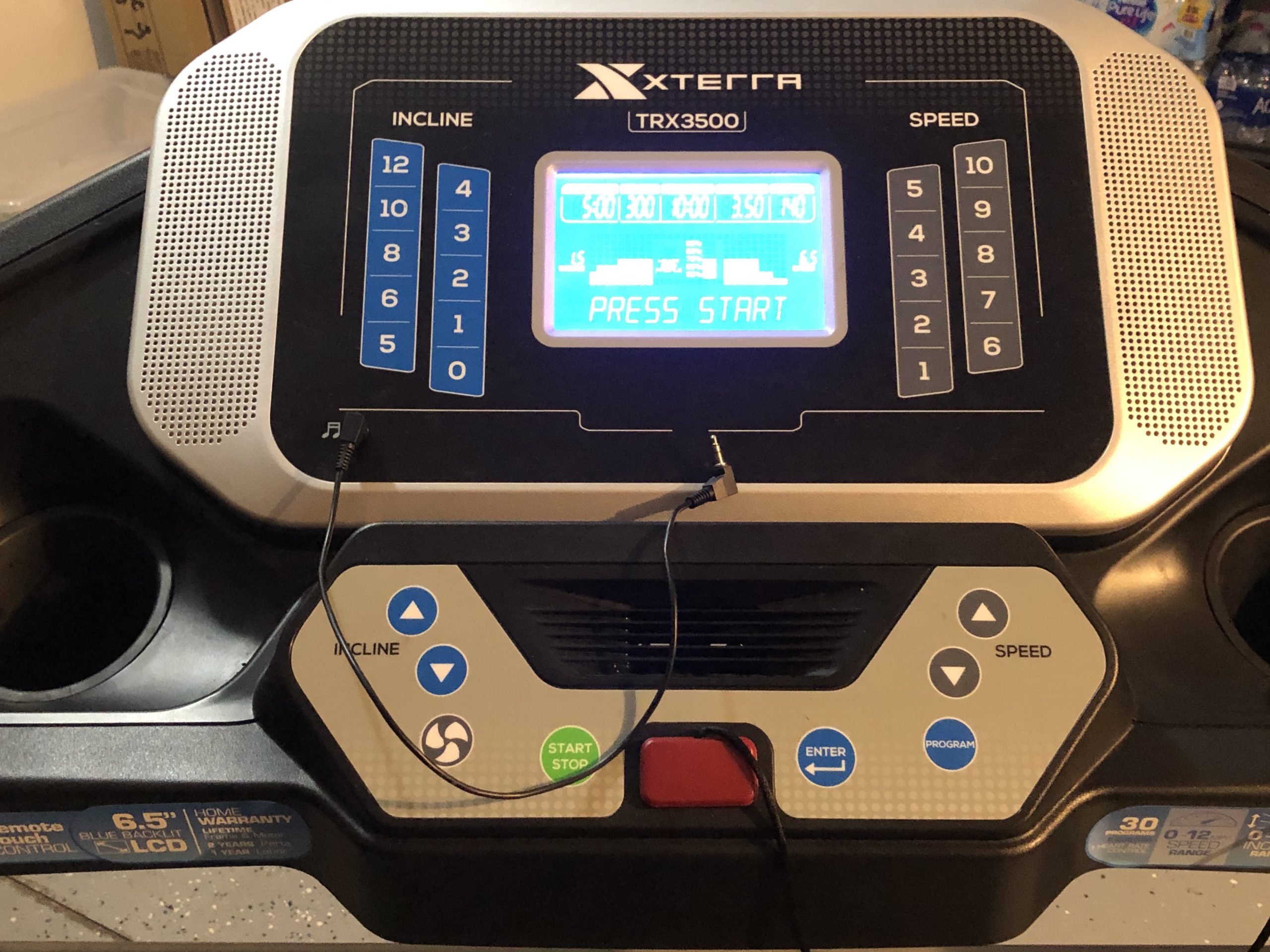 Here’s how it looks while folded

It says it folds up, which is true. What it doesn’t tell you is that it doesn’t fold up to a full vertical storage. Again, I can’t be too disappointed because I knew this when I purchased the treadmill. When stored, the treadmill is about 70 inches at its height…so just tall enough for me to run my head into it if I’m not careful when passing by. Putting it up isn’t too bad. You do have to lift it from the back of the treadmill to get it up, and it might be heavy if you’re not used to lifting things. I would say it’s equivalent to lifting 30 pounds or so. It’s not terrible, but it could be better. The storage is held by one pull-out tab. When you want to use the treadmill again, just pull the tab out, pull down on the treadmill and let it fall. It catches itself, but it does take a little bit to have it fully open, so wait a good 20 seconds or so before stepping onto it.

The noise is OK. It’s a little loud when I start running on it. You can’t expect it to be completely quiet. Having said that though, I wish the motor was a little quieter. It would make the treadmill nicer to run on. 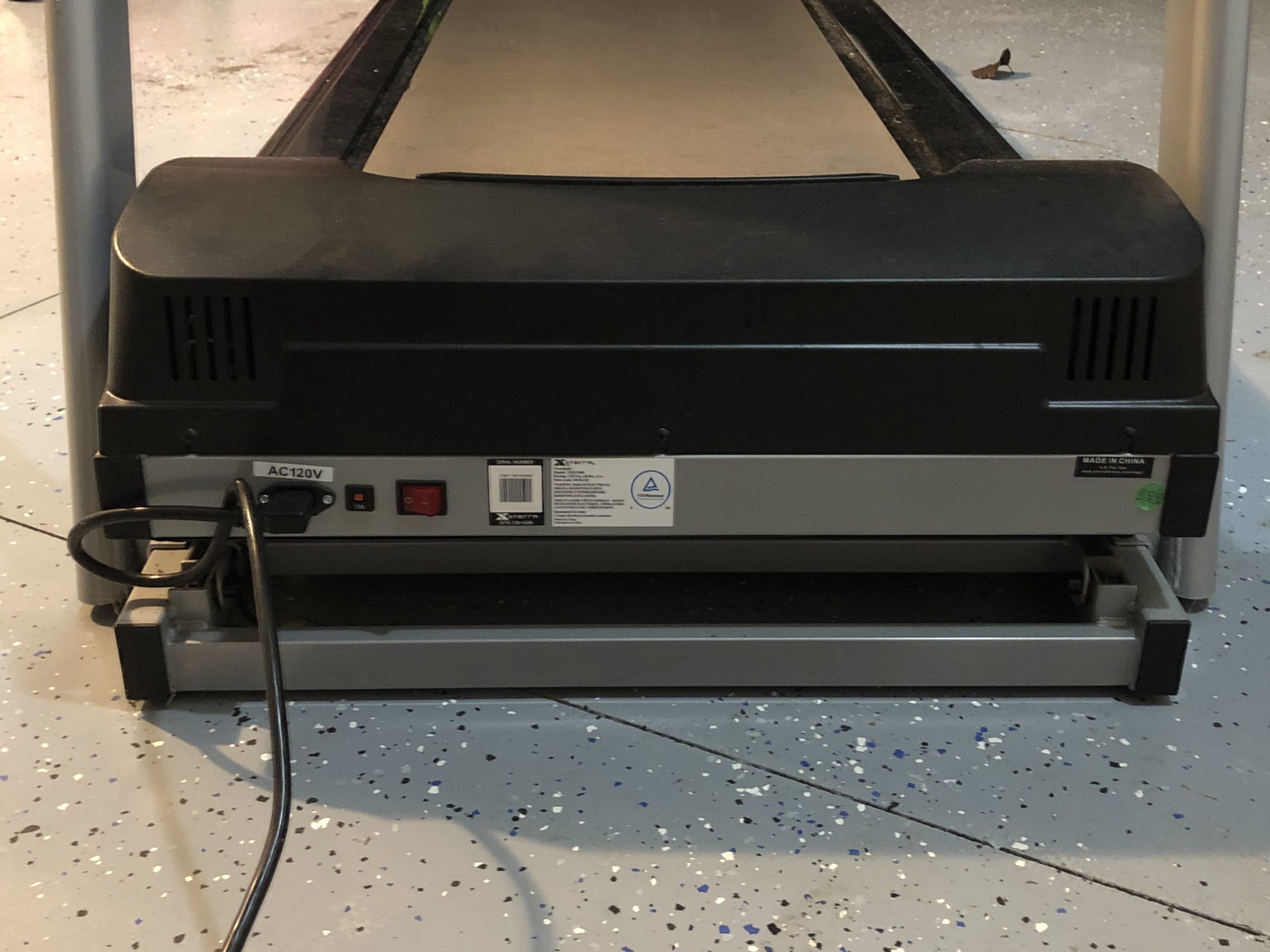 The red switch is the power

The power button is located on the front part of the treadmill toward the bottom. I wasn’t happy when I found that out. So, we can’t have the “ON” button on the control panel like every other workout machine? It doesn’t make sense to bend down to turn the switch on. Every time I turn it on I have to search for the dang thing. It was a terrible design flaw on the manufacturer’s part.

It does nothing. I turn it on and it barely blows air. You might as well not even have it. It’s a useless feature unless you’re willing to put a better one in there. I hope they either improve it on the next model or do away with it completely.

Again, you might as well not have these. With bluetooth devices, better speakers, and great technology of today. these speakers on this treadmill sound radio static. I once watched a whole show with those speakers, and it wasn’t any better than if I kept using my iPad speakers. Do yourself a favor and just use your bluetooth headset on it. Forget those speakers.

I’ve had this treadmill for around seven months and have yet to have the heart rate sensors work accurately. I don’t know what it is, but I haven’t been successful. It may be user error (most things are) but I’m pretty sure I know how to put my hands on the silver things on the arms. It’s not too hard. I wish they were placed at the front of the treadmill like most.

It’s not a bad treadmill. I’ve enjoyed many miles on the Xterra 3500 and will enjoy many more. The bad features aren’t horrible (except for the “on” switch). To be completely honest, I got it for my wife who has been training for a marathon. She uses it often and hasn’t had a bad experience with it. One time, I even tried to ruck march on it with a 35 pound ruck sack. I feel like it was a success!

Even though I give it a 6/10, I still recommend this treadmill to anyone who’s looking to get into shape or do some indoor running. It’s affordable on most decent budgets but not too cheap to make you feel like you’re going to break it. There are other models of the Xterra 3500, so here’s a table that’ll help you make a decision. 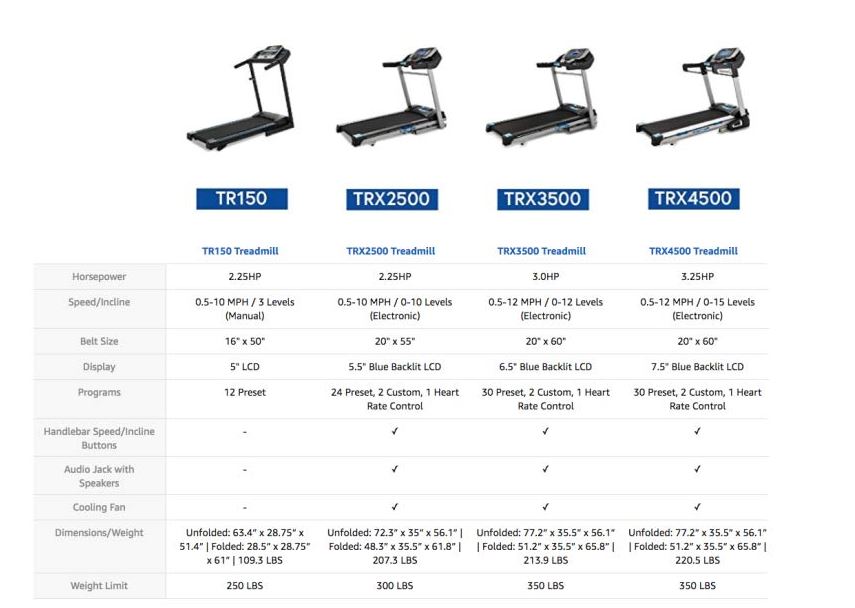 Comment below with your comments, concerns, or questions. I hope you enjoyed this review! Thanks Garage Gym Goers!